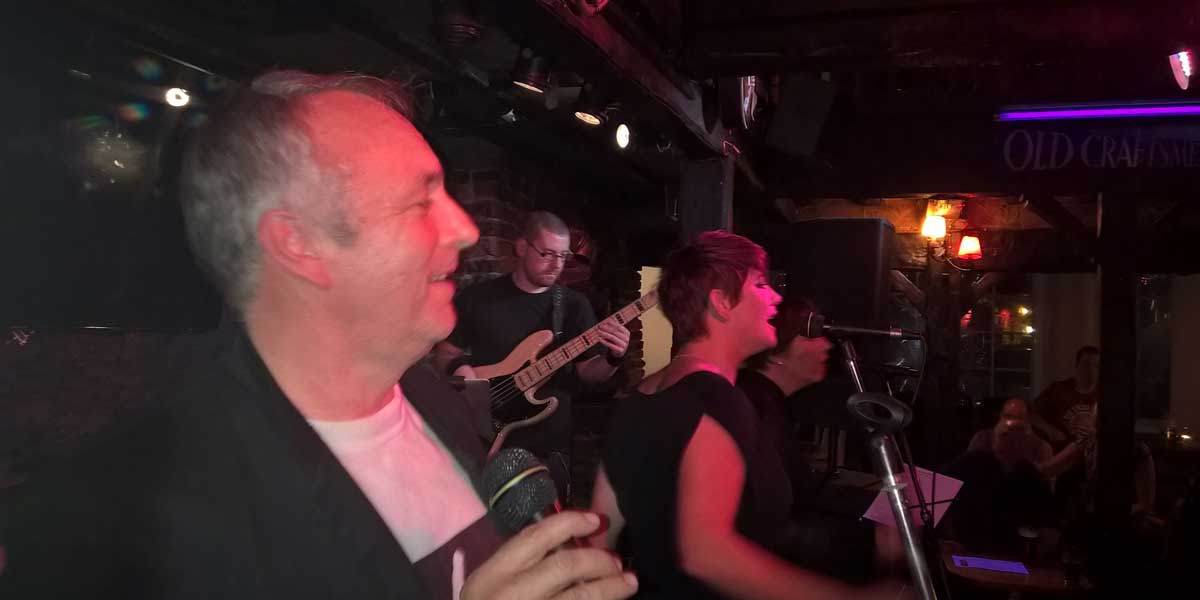 We had a cracking gig last night at The Spinning Wheel in Paignton, we had thought it was going to be a welcome back to Christina (which it was, but we’ll do a proper welcome back another time now). As sometimes happens, particularly in a 9 piece band, things conspired against us.

Phil: “Flight back to UK tonight, at present I have a throat infection and completely lost my voice”….

Phil: ”I have been to the doc and I have laryngitis”

We’ve pulled things out of the bag before, we always do – one of the great things about Dodgey Practice is not only the current line-up, but the history and connections the band has. Over 20 years we have either had in the band, or associated to the band in some way some fantastic people, so even when there’s a problem at the last minute there’s always a couple of numbers to call for help.

We’ve gigged without a male vocalist before, and I’m sure it’ll happen again one day – there’s enough talent in the band to pretty much cover ourselves for any situation, but for Thursday night’s gig at the Spinning Wheel I got in touch with Rob who used to front the band before Phil.

Rob was ready to step in, already looking forward to catching up again with the Dodgey crew, but with a question mark over some of the new songs we do, particularly the high ones Phil usually does (anyone for some Bee Gees?).

So… with new set list put together at around 4pm, we kicked off on time – lots of extra’s for Helen and Christina as well as some songs from around 4 years ago for the band to remember (a couple of the band even quickly learnt songs just before/during the set).

A big thank you to everyone – I’m sure at some point we’ll re-tell some of the other last minute scrambles we’ve had in the past to make sure that Weddings, Functions, Charity Balls etc. go without a hitch.

As always, whatever happens we’ll give you a great night, and last night was thoroughly enjoyable.

See you all back at The Spinning Wheel on 01 Oct